During the summer holiday, Cheyenne is in Tahiti and calls Marlon, she wants to visit him during the shooting of his new film "The Freshman", a parody of "The Godfather". The Freshman is a 1990 American crime comedy film starring Marlon Brando and Matthew Broderick, in which Brando parodies his portrayal of Vito Corleone in The Godfather.

Clark Kellogg (Matthew Broderick) leaves his mother (Pamela Payton-Wright) to go to New York University (NYU) to study film. As he's wandering around lost in Grand Central Terminal, he's approached by Victor Ray (Bruno Kirby), who at first offers to carry Clark's bags for him, then offers Clark a ride to college in his car. As soon as Clark steps out of the car, Victor drives off with Clark's luggage still in the trunk. Clark tells his professor, Professor Fleeber (Paul Benedict), who uses books he has written as required study, about losing his books. Clark notices out the window Victor walking by and gives chase. Victor vows to give his luggage back in return for a favor. Clark is introduced to Victor's uncle, Carmine Sabatini (Marlon Brando).

Cheyenne will tell Peter Manso later, in 1993 that first, Marlon accepts, but all of sudden refuses. He thinks that this is not a good idea that Cheyenne deal with cinema, Hollywood, etc."My children are tahitian, they will be unhappy in America, this shallow world."
Cheyenne is furious and wants to take drugs with Dag. But Dag deprives her and they have an argument the all night. The following day, in the early morning, she takes Teihotu's jeep, to have a walk. She has a terrible accident. Her face is disfigured, she is in a very bad estate and is close to death. Marlon wants her to be opered in USA, he just let the tahitians doctors to sew up one of her torn ear. When Marlon sees Cheyenne, he is in tears and kisses her hand. He is nervous and cries "Never mind the money I will spend, I want her to be beautiful again!" The doctors say that Cheyenne has bigs scars on her face and her left eye is seriously wounded. Her cheeks and her jaw are broken.
Hopefully, the operations are a success. Cheyenne finds again her beauty but she loses something else: according to Marlon, Cheyenne's brain is damaged, doctors put metal on some places of her brain. (But Cheyenne will contest this in 1993.) Also, Cheyenne has two litlle scars: one under her left eye and one under her lips. We can see that her cheeks are bigger now.
CHEYENNE BEFORE/AFTER 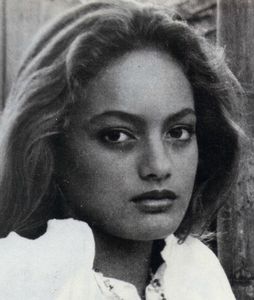 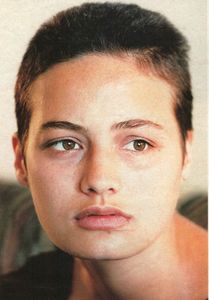 Cheyenne is back to Tahiti and has violent crises again, and finds out she is pregant, three or four months after the accident. So that makes Dag father twice: he has a 4 year old little girl, Tiairani.

In the meantime, Marlon ends up his love relationship with Yachio and is with his cleaning lady, Maria Christina Ruiz. She gives birth to Nina Priscilla, in May 1989. She is his third daughter, after Cheyenne and Rebecca (who is actually an adopted girl. In any case, Marlon's always contested that Rebecca is his second child from Movita, his second wife, but has always treated her as if she was. There are rumours also that even Miko is an adopted child! What a mess...)
Posté par : lolie111 à 23:28 - Marlon Brando Biography 1990 - Commentaires [0] - Permalien [#]
Tags : cheyenne brando, famille brando, marlon brando, mes scans